Well folks, we have officially started our 2015 ‘LAMB TOUR’ and what a way to begin in the beautiful venue of The GRAND in Clitheroe. 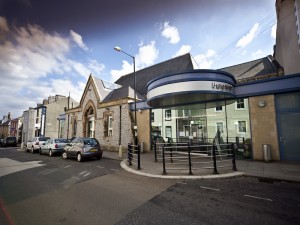 We had a nice uneventful drive and couldn’t beleive how picturesque the town is, with it’s own Castle and some cracking little teashops where we sampled the local Pies.

Our new drummer Ged was naturally nervous after such little time to learn the mountain of work we had thrown at him, and we were too but after a great soundcheck we were ready. Showtime came and we walked out on stage to an almost full house and once we got rolling all the nerves turned to energy and we stormed through the Lamb with only a few blips. The audience gave us a full standing ovation which was quite overwhelming and we came back out and delivered some more old Genesis classics for a four song encore.

Ged has been a fabulous addition to the band and his accolades from members of the audience afterwards were richly deserved, such lovely people to play to!

Next shows are coming up at the end of the month in Newcastle O2 and Sheffield O2 on September 25th and 26th respectively, we really do hope to see some of you if you can make it, these are BIG rooms to fill but with a stage to match, the show will look stunning! See you there